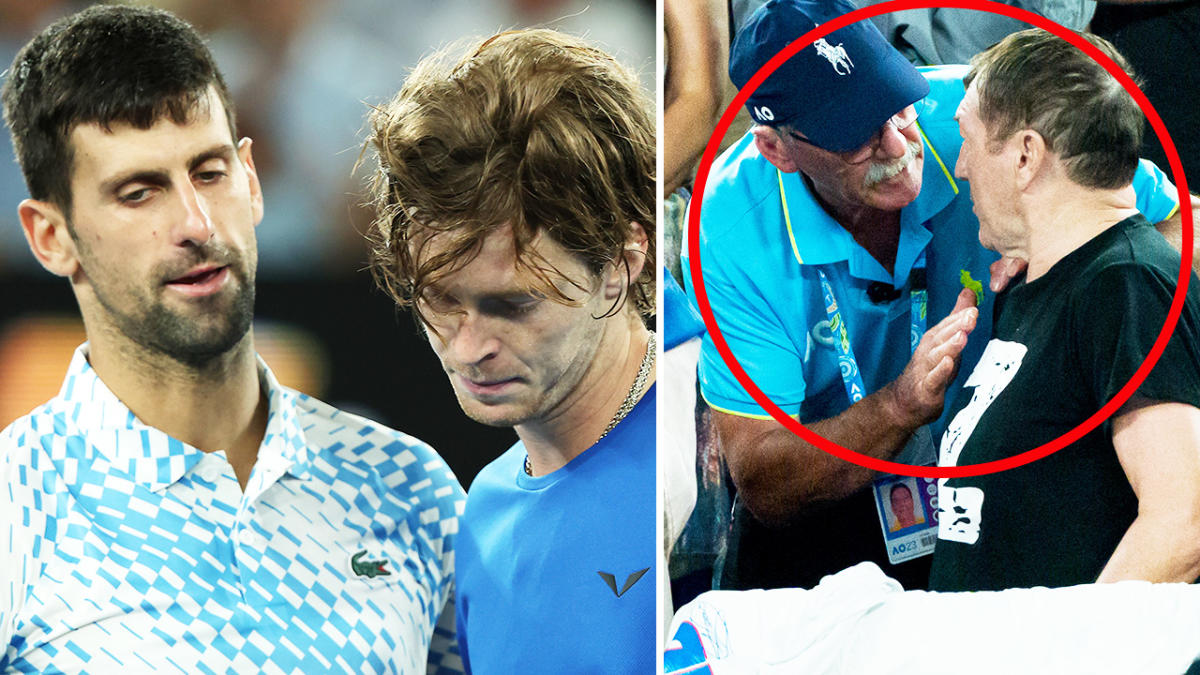 Four spectators who attended the Australian Open on Wednesday night have been questioned by the police afterwards displaying pro-Russia signage at Melbourne Park. One man could be seen waving a flag with Vladimir Putin’s face on the front, while another unveiled a shirt with the pro-war ‘Z’ symbol on it.

‘SHUT UP’: Novak Djokovic explodes in the Australian Open quarter-final

One man held up a flag with Putin’s face on the front while wearing a black shirt with a white ‘Z’ on the front. The symbol has been used to promote Russia’s war in Ukraine.

A different man had earlier been seen in the front row of the crowd at Rod Laver Arena wearing a ‘Z’ shirt. Throughout the match he was wearing a different shirt before taking it off to reveal the ‘Z’ symbol later.

The man was spoken to by a security guard but appeared to remain in his seat afterward. Tennis Australia previously banned all Russian flags – past and present – from the grounds at Melbourne Park. Russian and Belarusian athletes are allowed to compete, but cannot do so under their national flag.

A Tennis Australia spokesperson said on Wednesday night: “Four people in the crowd leaving the stadium revealed inappropriate flags and symbols and threatened security guards. Victoria Police intervened and are continuing to question them. The comfort and safety of everyone is our priority and we work closely with security and authorities.”

Tennis Australia initially allowed spectators to bring Russian flags into Melbourne Park, as long as they did not cause disruption. However, they banned them altogether afterwards a number of flags were displayed on the opening day of the tournament.

Vasyl Myroshnychenko, the Ukrainian ambassador to Australia, tweeted a screenshot of a Russian flag in the background while Kamilla Rakhimova of Russia was playing Kateryna Baindl of Ukraine. Myroshnychenko wrote: “I strongly condemn the public display of the Russian flag during the game of the Ukrainian tennis player Kateryna Baindl at the Australian Open today. I call on Tennis Australia to immediately enforce its ‘neutral flag’ policy.”

Tennis Australia said: “Our initial policy was that fans could bring them in but could not use them to cause disruption. Yesterday we had an incident where a flag was placed courtside. The ban is effective immediately. We will continue to work with the players and our fans to ensure the best possible environment to enjoy the tennis.”

The ban has been flouted on multiple occasions, with fans spotted with Russian flags in the days since.

Russian and Belarusian players star at the Australian Open

Rublev was one of two Russian players still in contention in the singles draw on Wednesday. Compatriot Karen Khachanov will take on Stefanos Tsitsipas in the semi-finals on Friday.

In the women’s draw, Belarusian players Aryna Sabalenka and Victoria Azarenka are both in the semi-finals. Both Russian and Belarusian players have been playing without a flag next to their names throughout the grand slam at Melbourne Park.

Last year Wimbledon made the controversial decision to ban players from Russia and Belarus due to Putin’s invasion of Ukraine. The ATP and WTA tours then retaliated by stripping the grand slam of ranking points.

Click here to sign up to our newsletter for all the latest and breaking stories from Australia and around the world.