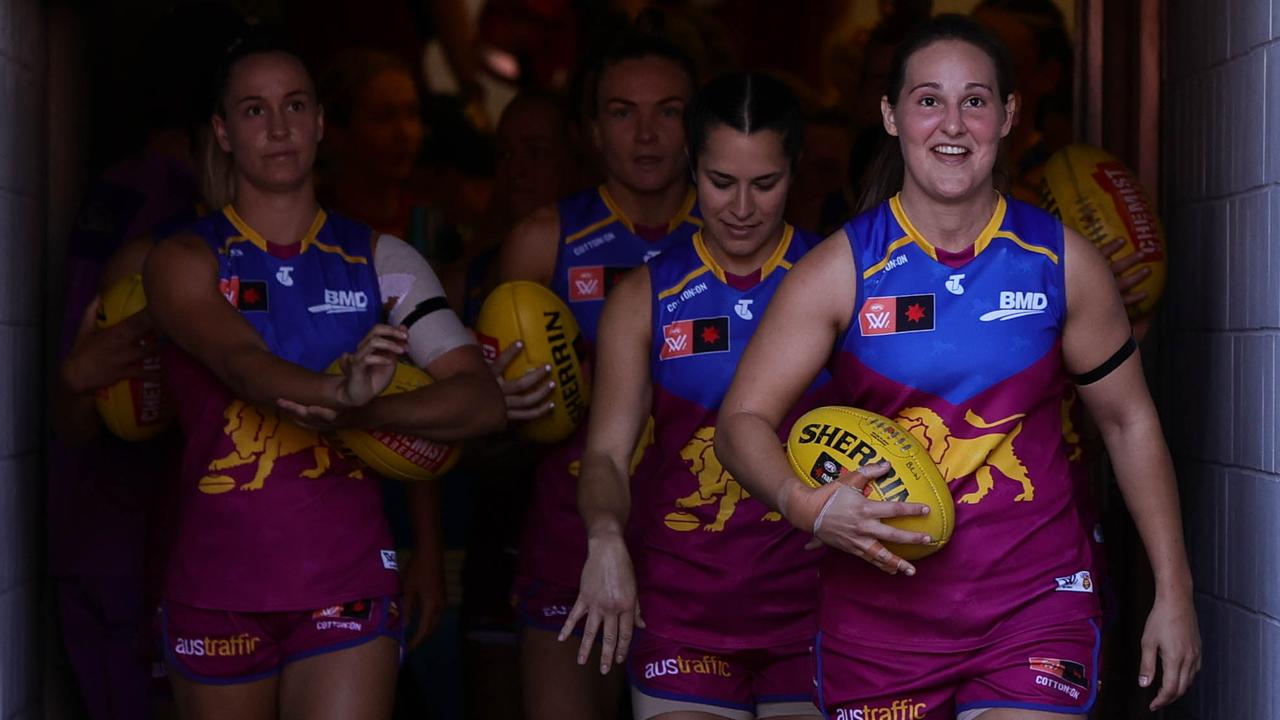 The AFL has come under fire for allowing Brisbane to host the AFLW grand final at a venue that’s “nothing more than a glorified training pitch”.

On Friday the Lions won the right to host the season seven decider, but with both the bigger Gabba and Metricon Stadium unavailable, Brisbane has turned to their new base at Springfield.

Remarkably, the brand new $80 million Brighton Homes Arena has only 600 grandstand seats available, and holds up to just 8,000 people.

Furphy has made the commitment to provide equal support to its AFL and AFLW teams. Don’t support the AFLW? Unbelievable.

Fox Footy’s AFLW expert Chyloe Kurdas questioned if the right decision was made to send the game to Springfield – where Lions players have yet to actually get on the turf.

“It’s an interesting decision,” she said on Friday night.

“There’ll be lots of questions, lots of eyes on it. I don’t think the competition is ready yet to say no to growth.

“It’s never hosted a game – it’s only had its turf laid down for heaven’s sake,” he said.

“It might be hosting an AFLW grand final that history has shown can attract more than 50,000 people.”

The AFLW grand final has drawn an average of 23,000 fans across the five deciders, with Adelaide Oval hosting the past three – including the 2019 grand final attended by a whopping 53,034 people.

3AW journalist Tom Elliott believes Marvel Stadium would have been the better option for the AFLW given its capacity.

“They are talking about a football ground called Springfield which is nothing more than a glorified training pitch,” he said this week.

“I find this utterly astonishing.

“If 50,000 people want to rock up and watch the two best women’s teams go head-to-head against each other … play it at Marvel Stadium here in Melbourne because Marvel Stadium is owned by the AFL and be done with it.

“Don’t give home ground advantage. Just don’t have a women’s grand final at what amounts to a training track.”

Fox Footy’s David King believes the AFL had set itself a precedent when it came to crowd size priority by allowing Richmond to lock out thousands of fans from the elimination final last weekend.

The Tigers chose to play their home final at the club’s “spiritual home” Punt Road – which held just a few thousand fans.

“Richmond have set the course here – it’s not about the volume of people you can get to the venue,” King said on SEN.

Edmund was concerned that the AFL had “walked into a battle they can’t win” by moving the AFLW season to later in the year – outside of its usual summer timeslot.

With the grand final in November instead of March/April, Brisbane’s bigger venues the Gabba and Metricon Stadium are already booked out.

The Gabba remains under cricket authority – with both a Sheffield Shield game and an Australian Test in the coming weeks, while Metricon Stadium is hosting a music festival featuring international superstar Calvin Harris.

“There’s a debate every year from interstate clubs now: ‘We want the grand final in Perth, Adelaide, whatever’. It’ll never happen with the contract with the MCG. I think it’s admirable but with this new timeslot on the calendar, they’ve walked straight into a battle with cricket they can’t win,” he said.

Even Lions star Emily Bates admitted players were yet to actually get on the freshly laid Brighton Homes Arena turf.

“While the turf was laid only a month ago, we traveled to a nearby community field to train,” she said after the preliminary final win.

In a statement, the AFL confirmed it had conducted an “independent turf inspection” this week, where the ground was deemed “suitable to play”.