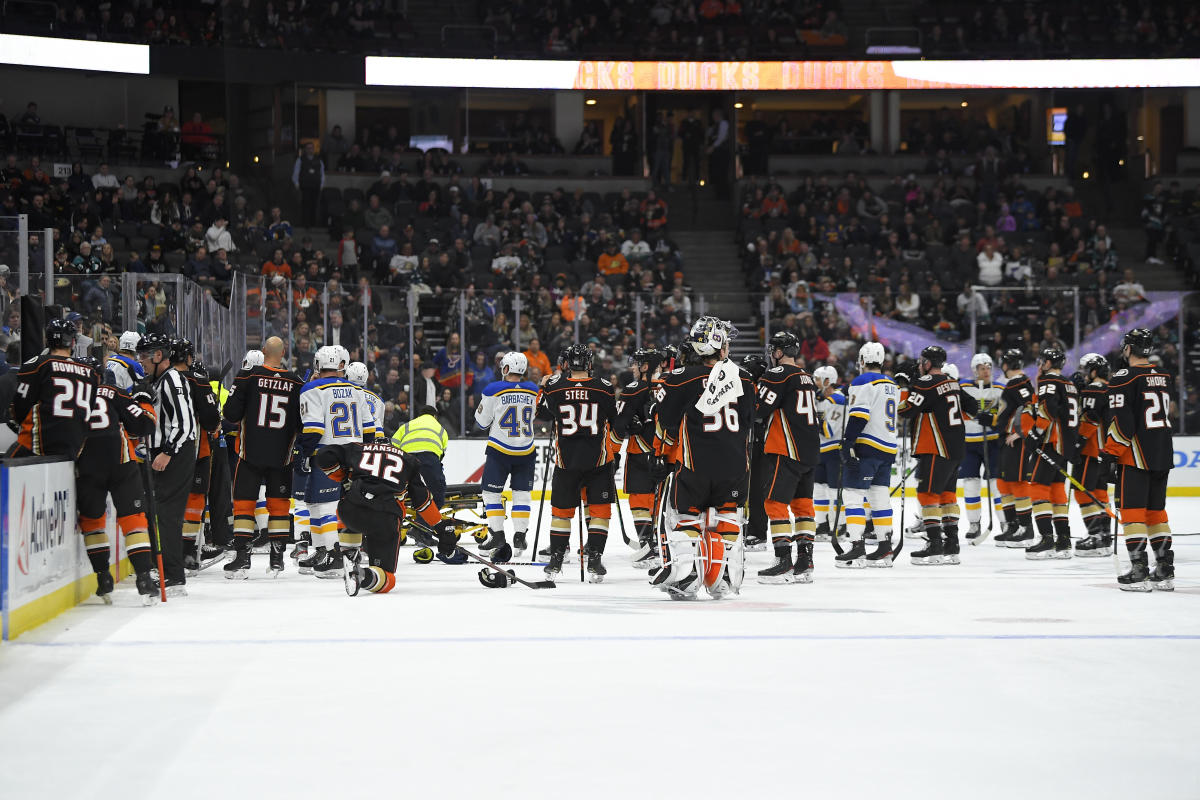 The horror that swept across the NFL when Buffalo Bills defensive back Damar Hamlin collapsed and went into cardiac arrest during a game this week in Cincinnati was all too familiar to members of the hockey community.

Five players in the NHL over the past 25 years who collapsed during a game — terrifying scenes that stopped play while people scrambled to help — were diagnosed with a heart-related issue of some kind.

Big defenseman Chris Pronger went down after taking a puck to the chest. Jiri Fischer, Rich Peverley and Jay Bouwmeester all collapsed on the bench. Ondrej Pavelec went down on the ice.

All recovered — a couple of them went on to play for years — and the incidents prompted the NHL to adjust procedures to prepare for and handle cardiac events, rare as they may be.

“It allows you to make sure that your protocols are working,” said Pronger, who suffered from the condition commotio cordis when he took a slap shot to the chest during a playoff game in Detroit in 1998. “You’re able to kind of see where things went right, where things went wrong and you’re able to really kind of dig in and enhance or say, ‘No, this is exactly what we planned for, this is exactly what happened and this is how we’re supposed to manage and take care of these situations.’”

Hockey has had enough of these situations to make doctors and trainers ready for handling the next one.

It’s a plan that has evolved: electrocardiogram (EKG) tests first became mandatory for players in 1998, and in 2005 a doctor was simply required to be within 50 feet of the benches and AEDs to be in close proximity.

After Peverley collapsed during a game in Dallas in March 2014, the NHL required the doctor on hand to be an active, trained specialist in emergency management. In the years since, there have been enhancements in cardiac life-support capabilities and additional provisions for CPR and cardiopulmonary rehearsals involving paramedics and arena staff.

“The single most important thing is that everybody involved in either a practice or a competition is aware of an emergency action plan, and that includes an ability to recognize a cardiac arrest, to initiate CPR as quickly as possible and to get access to an AED as quickly as possible,” said Dr. Ben Levine, a professor of internal medicine and cardiology at the University of Texas Southwestern Medical Center who treated Peverley. “The quicker you can initiate that cascade of events, the more likely there is to be a successful outcome.”

University of Alberta Dr. Terry DeFreitas said 2 minutes is the ideal response time to start CPR and the use of an AED. She said she believes it helps medical personnel to know the arena and for ambulances to be close to the ice.

“That doesn’t give you a lot of time at all,” DeFreitas said.

Quick work from trainers like the Blues’ Ray Barile with Pronger and again with Bouwmeester in February 2020 and Detroit’s Anthony Colucci with Fischer may have saved the players’ lives. Now there’s a blueprint for how to respond within seconds.

Retired defenseman Mathieu Schneider, who was next to Fischer when his teammate collapsed in 2005, said medical staff deserve a lot of credit.

“I really think we’re at a place, a point in time now, where we’re prepared for almost anything that can happen within a game situation,” said Schneider, who serves as special assistant to the NHLPA executive director.

The Russia-based Kontinental Hockey League in 2008 saw 19-year-old New York Rangers prospect Alexei Cherepanov died of heart failure during a game. At the time, there was no ambulance on site and no working defibrillator. Afterwards, the league took steps to mandate not only those changes but require comprehensive physicals for players and more.

“The KHL certainly learned lessons there, especially if they were going to get players at that point in time to come over there,” said John Davidson, who has spent nearly five decades in hockey and is now president of hockey operations for the Columbus Blue Jackets.

Davidson took plenty of pucks to the chest and neck as an NHL goaltender from 1973-82 and was a broadcaster at the game when Pronger was struck. Davidson has grown to appreciate the amount of work that goes into protecting players.

“It’s a major part of what we do,” Davidson said. “We don’t just show up, drop the puck, play the game and go home. There’s a lot of stuff that goes on behind the scenes, and I feel very comfortable with the standard of safety that we have with the NHL.”

The NFL will now look at how Hamlin’s cardiac arrest was handled, much like the NHL studied its cases to see what can be improved.

“That’s the key to doing anything well,” Levine said. “See what happened in your event or another event, ask, ‘What do we do, and can we do that better?'”