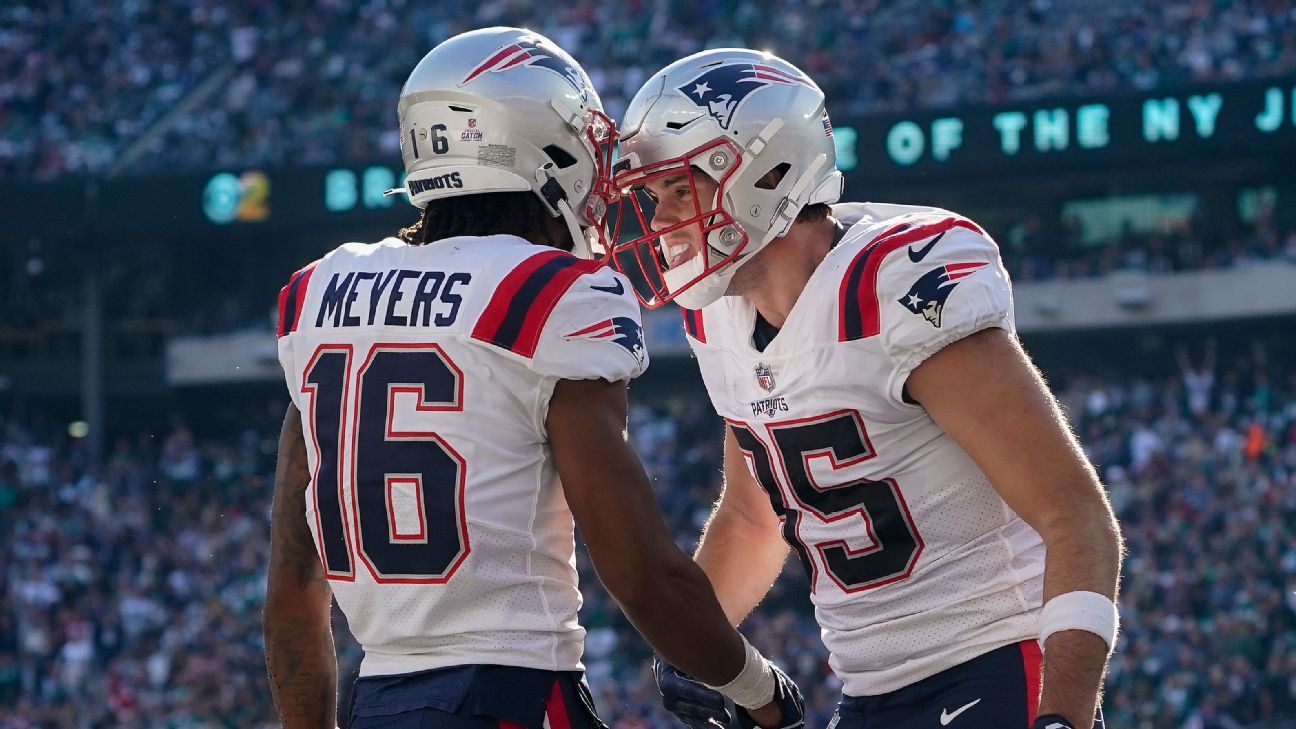 FOXBOROUGH, Mass. — Quick-hit thoughts and notes around the New England Patriots and NFL:

1. Patriots’ stakes: Bill Belichick has often said in his tenure as Patriots coach that the football season begins after Thanksgiving. It will be imperative for his New England team to beat the visiting New York Jets on Sunday (1 pm ET, CBS) to ensure that is the case this season.

The Patriots’ chances to qualify for the playoffs drop to 8% if they lose, according to ESPN Analytics. They would improve to 30% with a win.

The numbers frame the urgency with which players approached this week as they returned from their Week 10 bye eager to build on their 5-4 record.

“Stakes are high, emotions will be high, it will be highly competitive. There’s a lot on the line,” longtime captain Matthew Slater said.

“Things are starting to get real,” added receiver Jakobi Meyers. “The end of the season is near. We all want to be in a good spot.”

The Jets (6-3) have more margin for error than the Patriots, as well as motivation for delivering a knockout punch to the AFC East rival they haven’t beaten in each of the past 13 meetings. The Jets’ chances of qualifying for the playoffs jump to 87% with a win and drop to 59% with a loss, per ESPN Analytics.

One reason for the Patriots’ lower odds is their remaining schedule, which is rated among the most challenging in the NFL. Sunday’s game kicks off a potentially season-defining stretch of three games in 12 days, with a Thanksgiving road game against the Minnesota Vikings (8-1) followed by a Thursday night home game against the Buffalo Bills (6-3).

Most Patriots players deflected any mention of what’s ahead, willing to talk only about the JETS, Jets, Jets.

“When you start thinking down the line, or think about the big picture, things get lost in the wash,” linebacker/captain Ja’Whaun Bentley said.

Longtime captain David Andrews echoed similar remarks before adding: “We have a clean slate coming off the bye. These last 8-9 weeks we can determine what it is, or what it looks like.”

2. Windy forecast: One reason the Patriots practiced inside Gillette Stadium on a frigid Friday (40 degrees) was to give players involved in the kicking game — such as new punter Michael Palardy and punt returner Marcus Jones — a simulation for the way the wind might affect Sunday’s game against the Jets. The forecast calls for gusts as strong as 20 mph.

Jones, who was born in Enterprise, Alabama, and played in college at Houston, reflected on a road game at UConn late last November when conditions were similar. “The main thing is just knowing the wind patterns. Sometimes it will be strong winds up high, but around where you are, it will be low winds,” he said.

3. Construction effect: The Patriots’ ongoing construction in the south end zone — which will enclose that side of the stadium once finished in 2023 — has changed the wind pattern in the stadium, according to special teams coordinator Cameron Achord and Belichick. Achord said he has kept detailed notes from each day (even in practice) and relayed: “It hasn’t been a true pattern. It’s been changing each week, so you’re really relying on what you’re feeling on game day.”

4. Rosie view: Former Patriots linebacker Rosevelt Colvin tries to watch the team every week, and naturally his eyes are drawn to his old position. “[Matthew] Judon is killing it,” he said of the NFL’s sack leader with 11.5. “Not a lot of help from the other side, but they are creative with the rushes mixing in the inside linebackers. It looks like he’s more in the Willie [McGinest]-style role versus mine, where I’d drop more [in coverage].”

5. Conservative BB: Teams are going for it on fourth down almost as much as ever, but Bill Belichick isn’t going along with the trend. There have been 399 plays in which teams have gone for it this season, the second most through 10 weeks since 2000. But the Patriots have the fourth-lowest go-for-it rate at 9.7%, putting them on pace for the lowest go -for-it rate in a season since Belichick became their coach in 2000.

6. Guy’s jersey: Defensive tackle Lawrence Guy is in his sixth Patriots season, and what makes this one special for his family is a switch he has made on the back of his jersey. It no longer reads “Guy,” but instead “Guy Sr.” — a reference to his 3-year-old son, Lawrence. “I felt like I wasn’t giving him respect,” he said. “I tried to do this last year, but it’s a process to get it done and it takes a couple of months after submitting the birth certificate. It got approved just in time — if you look at preseason, it’s not there, but in the season, it’s been there. This is to honor him and his name.”

7. Winter is coming: Rookie running back Kevin Harris, the sixth-round draft choice from South Carolina, walked out of the locker room with a snow brush and ice scraper last week. Asked if he’s ever used one before, he shook his head, smiled, and said: “I need one now.” It was a reminder that sub-freezing temperatures have arrived in New England, which can be a shock of sorts to rookies like Harris, who grew up in Hinesville, Georgia.

8. Cardona’s future: Joe Cardona has been the Patriots’ long-snapper since the team selected him in the fifth round of the 2015 draft and has been at the forefront of fighting for the position to gain more respect across the NFL, such as putting it on the Pro Bowl ballot. Cardona, who is in the final year of his contract, told Sports Illustrated he’d also like to see the position respected more at the negotiating table, which could foreshadow how he plans to approach his impending free agency.

9. Patten’s beginning: Late Patriots receiver David Patten’s son, Daquan, is now following in his footsteps after signing with the Albany Empire of the Arena Football League on Friday. It’s a decision that hits close to home, as David — who tragically died in a motorcycle accident in September of 2021 — began his professional career with the Albany Firebirds in 1996 before breaking into the NFL the following year with the Giants. That would be a dream football scenario for Daquan as well.

Welcome to the Empire, Daquan Patten!

10. Did you know? The Patriots’ 13 straight wins over the Jets is tied for the longest active streak in the NFL, with the Chiefs having won 13 straight games over the Broncos. The streak is the second longest in Patriots franchise history, behind only a 15-game winning streak over the Bills from 2003-10.