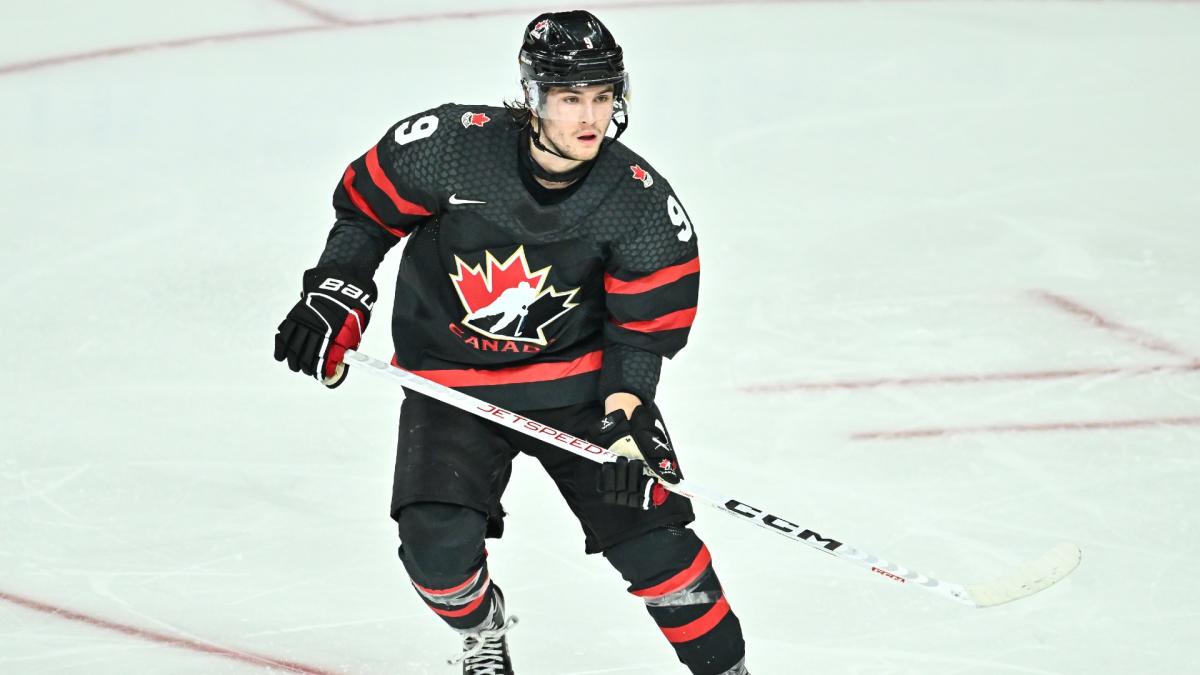 The tournament was filled with memorable performances, including by draft-eligible Connor Bedard, who led the tournament in scoring and was named MVP. Undrafted goaltenders Adam Gajan (Slovakia, Best Goaltender), Tomas Suchanek (Czechia, All-Star selection), and Thomas Milic (Canada, gold medal starter) also impressed scouts. As well, the tournament featured a handful of players already competing in the NHL in Canada’s Dylan Guenther, Brandt Clarke, and Shane Wright, who each had moments of brilliance.

Prospects who stood out

Cooley was touted as a quintessential top-six center heading into the 2022 NHL Draft. Voted a tournament All-Star after scoring 14 points in seven games, and helping the USA to a bronze medal, Cooley showed the hype is true. The third-overall selection of the Arizona Coyotes, Cooley looks certain to be a one-and-done player in the NCAA where he’s dominating as a rookie with Minnesota scoring 25 points in 19 games. His skating is effortless, and his hockey IQ is a step ahead of his opponents. Cooley was spectacular for the Americans at the World Juniors and was probably the best NHL-drafted forward in the tournament.

Czechia’s blue line was the cornerstone of their silver medal performance, and no player had a greater impact than 2022 sixth-overall pick David Jiricek. He entered the tournament scoring 20 points in 19 AHL games with the Cleveland Monsters, a pace almost unheard of for a rookie defender. At the World Juniors, he scored a point per game and was named the tournament’s top defender. Having already made his NHL debut this season, Jiricek might be destined for more time with the Blue Jackets. His opposition at the World Juniors struggled to hold the physical blueliner back, and his play is making it hard for Columbus to be patient, rather than bringing Jiricek to the NHL for good.

Stankoven was Canada’s second-leading scorer, but it was not only his playmaking and puck skills that impressed, it was the rest of his game. Stankoven drove possession for the Canadians, winning an incredible 65.62 percent of his face-offs in the tournament. The 5-foot-8 captain of the WHL’s Kamloops Blazers was selected in the second round, 47th overall by the Dallas Stars in 2021, and is starting to look like one of the biggest steals of his draft class.

A fourth-round pick in 2022, Jansson was one of the surprise players of the tournament. Jansson hasn’t put up big numbers with Sodertalje in Allsvenskan this year, but he racked up 10 points in seven games to tie for Sweden’s scoring lead with San Jose Sharks first-round pick Filip Bystedt. The 6-foot-4 Bytedt deserves praise as well, but Jansson, who was named a tournament All-Star, stole the show for Sweden. Florida Panthers fans are hoping this wasn’t a one-off, and that the organization’s scouting staff scooped a mid-round steal for the club.

The reigning QMJHL leading scorer was already considered a steal for the Montreal Canadiens who selected him in the fifth round, 150th-overall in 2021. After winning gold with Canada in the summer, scoring more than a point per game, Roy took his game to the next level this time around notching 11 points in seven games. It wasn’t just the totals that impressed, however, it was how Roy earned his points. He won board battles, was the first to loose pucks, and generated turnovers to shift possession, before creating offense. It will be interesting to see if Roy can jump directly to the NHL next season…because he’s proving himself worthy of that opportunity.

It’s hard to explain how poorly the World Juniors went for the Vancouver Canucks 15th-overall pick from 2022. It was an extension of his regression in Allsvenskan, but seeing Lekkerimaki pegged as Sweden’s 13th forward in elimination games took things to another level. In the bronze medal game, when a major penalty needed serving, it was Lekkerimaki the Swedes sent to the box. He has skill, but has been ineffective not only in producing, but playing off the puck as well. There is a long way to go before fans need to panic, but there should be concern within the Canucks organization.

One of the most polarizing NHL prospects on the planet, Lambert continues to confuse onlookers. Skill-wise, Lambert is dynamic, displaying elite abilities. Applying those skills to game situations is another matter. The 30th-overall pick in 2022, some saw Lambert as a top-five pick entering his draft year. In the last year, however, his stock has continued to drop, and after scoring only three points in his first 14 games with the AHL’s Manitoba Moose this season, and registering only a single point in five games for Finland at the World Junior Championship, red flags are flying. It’s too early to call the sublimely skilled 19-year-old a bust, but the Winnipeg Jets staff are certainly sweating over their selection.

It turns out Gaudreau faced an excellent team from Czechia in Canada’s tournament-opening loss, but it doesn’t excuse the missed opportunity. Gaudreau put up a 3.38 GAA and .828 save percentage in two appearances and lost his crease to undrafted Thomas Milic. A third-round pick in 2021, Gaudreau had a chance to prove his mediocre numbers with the OHL’s Sarnia Sting were not indicative of his potential, but Sharks fans will undoubtedly be questioning Gaudreau’s selection, specifically, after his World Junior struggles.

To say this tournament reduced Lysell’s stock in the Boston Bruins organization would be an overstatement. In the AHL with Providence, he has 19 points in 20 games. But to enter the tournament as a full-time AHL player who was the 21st-overall pick in 2021, and to compete on a team that advanced to the bronze medal game, where they lost 8-7, while not registering a single point in seven games is baffling. Lysell played third and fourth-line minutes during the tournament, managing only nine shots on goal. The Boston brass probably wish they’d kept their prized prospect in the AHL because the 2023 World Juniors were certainly a confidence killer for Lysell. It will be interesting to see how he responds in the second half of the AHL season.