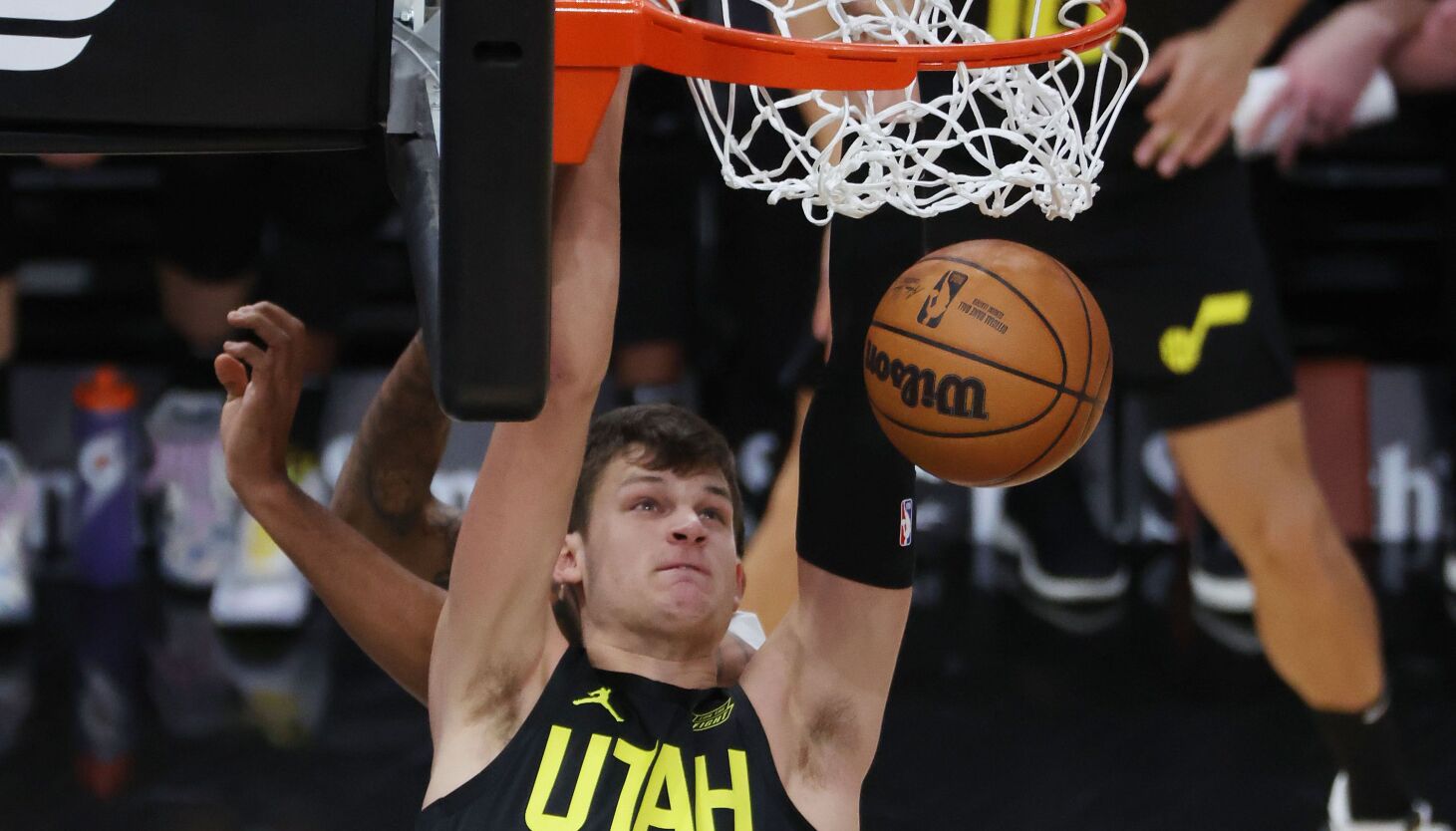 This article was first published as the Jazz Insiders newsletter. Sign up to receive the newsletter in your inbox every Friday.

The 2022 World Cup kicks off Sunday morning with host country Qatar facing Ecuador. With that in mind, I thought it might be a good time to discuss which Utah Jazz players are big soccer fans and which ones have experience playing the game. Topical, right?

But then Walker Kessler walked into the room, and everything he said needs to be shared with Jazz fans.

Kessler said that he’ll probably watch some of the World Cup action, but he learned early on that he was not destined to be a soccer player.

“My foot-eye coordination is not good,” he said. “I played one year of soccer. My mom had me play soccer in seventh grade because she said I was getting a little too serious about basketball during that time. And what position do you think I played?”

With that kind of length? It’s got to be go goalie, right?

“Correct.” Kessler said. “Played goalie and didn’t use my feet, at all.”

But was he any good?

“You know, there was one game where I had 37 saves,” Kessler says with a pause for gasps and jaw drops by the reporters. “We lost 10-to-0.”

The interview room at Zions Bank Basketball Campus erupted with laughter. A 37-save game is insane, but so is a game with 47 shots on goal.

Kessler laughed along with everyone else, knowing how crazy the whole thing sounded. He admitted that his team was not the best. So what does the miraculous goalie who has made an incredible amount of saves say to his team?

“I’m a competitive person, but I also don’t know any of the terms,” ​​Kessler said, still laughing. “So I’m just like, ‘Y’all gotta play better defense! I’m getting killed out there.’”

As if the situation wasn’t already bad enough, Kessler described one play where he was, wildly, wildly out of position.

“There was one play where we had a corner kick,” he said. “I sprinted down to try and get a header. Missed it completely. And then I had to like beat the ball. I had a foot race with one of the guys with the ball to my own goal.”

Kessler said his team scored just two goals that whole season. But of course, being serious about basketball has turned out very well for Kessler, and at least he can say that he played in a game where he had 37 saves. He doesn’t have to tell the rest of the story next time.

New with the Jazz

This week in Jazz history

On November 19, 1977, the New Orleans Jazz set a then NBA record for the fewest free throws made in a game — one. Despite 17 fouls by Houston, the Jazz went to the foul line only five times and made just one, yet still managed to defeat the Rockets, 103-101. On Jan. 9, 1996, the Toronto Raptors did not make a single free throw in a loss to the Charlotte Hornets, erasing the Jazz’s record of one free throw.

This week on ‘Unsalvageable’

This week the crew recaps the three-game losing streak to the Wizards, Sixers, and Knicks and talks about looking forward to seeing how this Jazz team responds to adversity.

The podcast has moved to a new feed, so remember to follow or subscribe by searching for “Unsalvageable” through your podcast provider.

New episodes come out every week. You can listen on Apple Podcasts, Spotify, Stitcher and anywhere else you stream podcasts.

Kawhi Leonard is back on the basketball court for the Los Angeles Clippers.

Former Jazz man Royce O’Neale got his first triple-double along with a game-winner.